I am developing what I’m calling a ‘Heritage App’ for the Curzon Community Cinema in Clevedon.  (See About for general information about the project). I’m working on a design specification for Jo Reid at Calvium who is going to encode the app using the Calvium Player – we met yesterday and I showed her some images and talked about a possible journey around the exterior of the building and some initial ideas about sound.

Above is a screen grab from Google Maps of the cinema which will be used as a guide for mapping GPS regions and speakers.  I’m envisaging this as primarily an audio experience at the minute, but there will clearly need to be some sort of interface so need to start thinking about that (at the moment Jo says functionality is key, the ‘content’ can come later, as long as we can agree a structure and descriptors we can pilot).

This is where the journey begins, with a narrative voice (possibly that of Victor Cox who built both the original 1912 cinema, and the one they built on top of it in 1921/2*), talking about how unprepossessing the building looks from this angle. I want a mingling of voices, some real oral histories, some imagined monologues, some poetic, all evoking the anticipation and wonderment of going to the pictures. 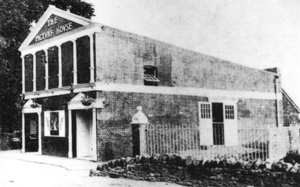 The rear of the building is the mews of a stables that was owned by Albert Type to service his horse-drawn taxi business, which was adjacent to the original cinema. 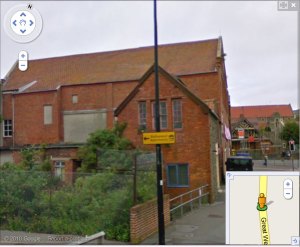 Very, very faintly, you can still see ‘The Picture House’ painted on the back of the mews, but you have to know where to look…. 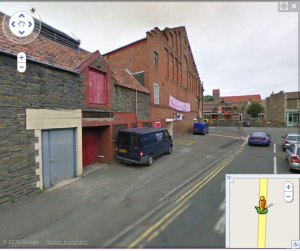 From this angle you can see the hayloft doors, where the offices of the cinema management are now located. The Eastern aspect of the building is where the current cinema screen is located, with the emergency exits visible on the right of the blue van.  This part of the present cinema sits on top of a paddock where Albert Type’s horses grazed. I’m imagining neighing and cart wheels on cobbles, maybe Albert Type’s voice drumming up business.

I love the kind of Wizard of Ozness of this picture palace having such an lugubrious rear – the glamorous facade hiding the inner workings of a business.

The Northeast corner of the building is were the box office for the cheaper seats was originally located, and on the facade above you can see the original lettering for The Oak Cafe, which was a silver-service dinning rooms, evidence that the cinema appealed to the full social spectrum of the local community.

The ‘posh’ entrance was on the Northwestern corner of the building, and this is where the current box office is located. The range of social class that the cinema attracted was brought home when I filmed two very different interviews, one with Muriel Williams who was in one of the thruppenney seats on the night the cinema was bombed in 1941, and the other with Julia Elton, daughter of Sir Arthur Elton of GPO Film Unit fame, who grew up going to the Saturday Matinee, but remembers her grandparents, Lord and Lady Elton, of Clevedon Court frequenting The Oak Room and causing quite a stir.  The land on which the original cinema was built was owned by the Elton family. 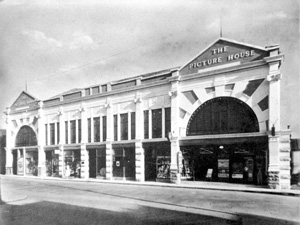 On the night of the bombing, six bombs were dropped in a line, the first one landing on Wellington Road, near the coast(roughly where the A pointer is on the map below), the fifth just missing the Curzon and the final bomb landing in the Coleridge Vale area.  One of the bombs was unexploded and was rather fittingly decommissioned by prisoners of war.

Muriel Williams remembers the air-raid warning flashing up on the screen, being ignored by most of the punters who continued watching the film, which was Rio (1939), starring Basil Rathborne:

The bomb hit the gas mains just out side the Western entrance, injuring two people, one of whom later died in hospital. Muriel Williams says that when the power went off in the cinema on impact, the ushers marshaled the patrons out in an orderly fashion and the customers all behaved calmly.  A friend of hers managed to pop out to survey the scene, teasing her that there were arms and legs strewn all over the place, but he was clearly only joking, as when she managed to get outside herself there were only ambulances and service vehicles dealing with the scene, but no carnage.

The bomb blew out the stained-glass window above the Western entrance, and you can still see the shrapnel scars on the stonework above. 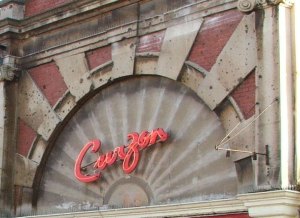 I wonder what Victor Cox, who built the cinema, but was a stonemason by trade, would have thought of his facade’s war wounds?

Whilst this is a dramatic moment in the cinema’s past, I don’t want to the App to be too backward looking.  The Curzon’s history is important, but so is it’s present.  I’d like to recreate the feeling of anticipation one gets when waiting in the cinema queue: kids voices, reference to the Saturday morning picture shows of the 1950s.  Julia Elton remembers the cinema being absolutely packed, recalling the excitement of being amongst the hoards of kids watching the silver screen as a real treat. 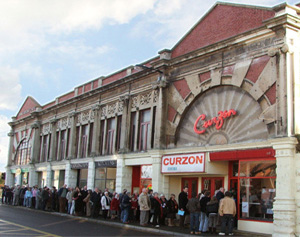 But it is important to  have contemporary thoughts, as well as memories.  So, perhaps we could also hear kids queuing up to see the latest Harry Potter.

Tune in to the next post where I thrash these ideas out into something more workable in practice, and talk about the challenges of interior localisation in the next phase of the project.

*(See Maurice Thornton’s (curator of the Curzon Collection) book The Everlasting Picture Show for detailed historical information about the Curzon, as well as the Curzon website and Google Maps which are the sources of most of the images).