One of the installations I’m working on with Tarim is Projection Hero, where the visitor can learn about the role of the projectionist through interacting with a miniature cinema. Here’s one of my initial drawings: 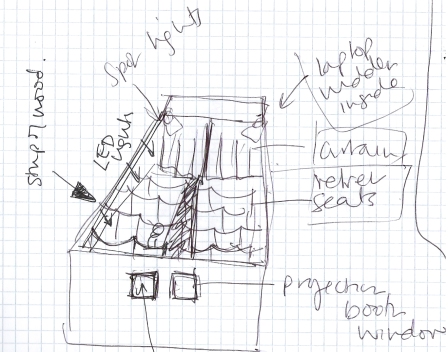 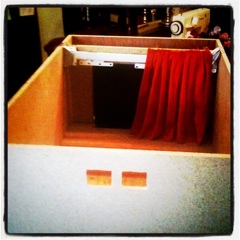 There will be a laptop, housed within a large white box, which will form the cinema screen, framed by working velvet curtains and lights.  There will be two little viewing holes, for projectionists windows at the back so that you can peep in and watch the tabs open up.  We’re using a curtain mechanism powered by a motor controlled by arduino, all hidden in a recess behind the computer screen, together with speakers and all the power cables.  The floor of the cinema will be raked and populated with tiny little hand-carved cinema seats.

The title is taken from the popular Playstation game, Guitar Hero, but celebrating the projectionist as the unsung hero of cinema.  The idea was inspired by an interview I did with Maurice Thornton, curator of the Curzon Collection and author of The Everlasting Picture Show several years ago in which he describes his induction into the role of projectionist:

“I can remember the chief at the Granada at Kettering when I went to work there, grand old fellow he was, he’d started way back in 1916 at the Stoll Theatre in London. I remember when he said to me, it was my first day there and I did know a bit about projection and I had been on the Granada’s week’s course, and he said ‘look, you’re the most important person you are, there’s hundreds of people that have made this film,’ he said, ‘but you’re the icing on the cake because you are going to show it to an audience, so you’re an artist and you’ve got to behave like as if you’re on the stage, instead of being on the stage you’re in the projection room, but you are showing, you are giving a performance’ and I’ve never forgotten that. That’s the difference between showing a film and pressing a button.”

Later on in the interview, Maurice claims that he likes film because “if it gets poorly, I can make it better,” again emphasizing the tangible material nature of the medium, as opposed to the “out of reach,” abstract “ones” and “noughts” of digital data.

What I’m hoping to do is to educate people about the hidden (and arguably dying) art of the film projectionist.  The irony is, of course, that within the app, the user will just be “pressing a button” using digital code.  We’re back to the dilemma of exploring the analogue through the digital.

One of the other things I want to explore is the technical logistics of using the iPhone to manipulate real world objects.  The way it will work is that the cinema screen will show a unique QR Code which you then scan as part of exploring the interior of the building. This will trigger a video of the quote from Maurice’s interview (cited above) which will play on the iPhone.  Once the video has finished playing you will be taken to an interface where you will be invited to interact with the installation.  Here’s the initial idea for the iPhone screen through which you will be able to dim the lights, open the tabs and start the film in the mini-cinema: 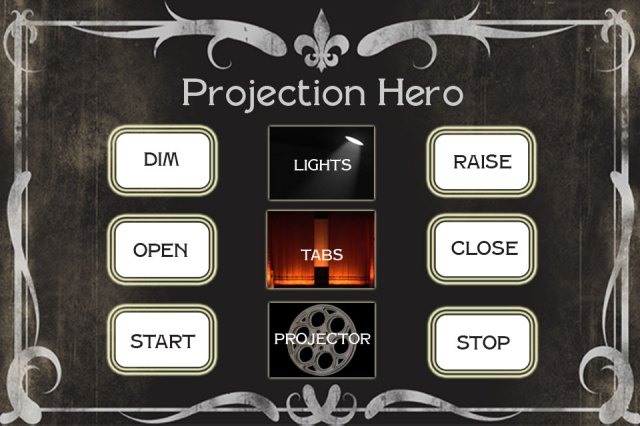 Ideas for developing this further, should funding materialise, include scoring the player’s “performance” as projectionist, (such as timing, speed, etc), having a playlist where you can cue adverts and even an area where you have to join and breakdown the film.