From the makers of the Curzon Memories App, comes The Lost Cinemas of Castle Park, a new app celebrating over 100-years of cinema-going in Bristol city centre, now available from iTunes.  The app covers 16 cinemas in and around the park, from the first moving pictures screened at the Tivoli, Broadmead in 1896 to the present day. 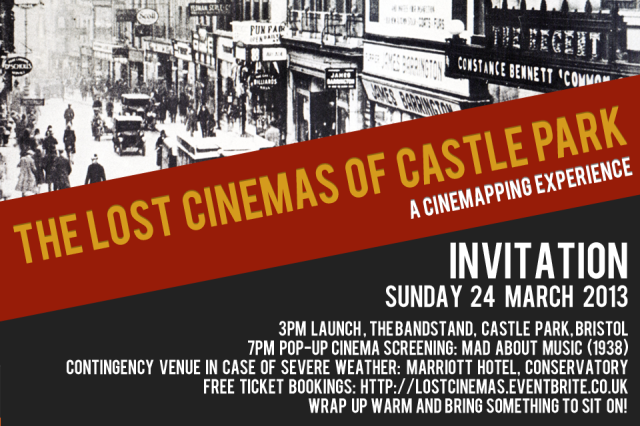 To launch the app we’re having a celebration on Sunday 24 March – the anniversary of the opening of Bristol’s first purpose-built cinema, The Queens Picture House in 1910.  The launch will kick off at the Bandstand in Castle Park at 3pm with the chance to try out the app, educational activities for children designed by Local Learning and cinema memory gathering.  After the Intermission we’ll regroup at sunset, 7pm, for a pop-up cinema solar-powered cinema screening of Mad About Music (1938) – the first film to be screened at the Odeon, Union Street, the only cinema featured in the app still operating today.

A lighthearted musical, starring Deana Durbin, Mad About Music was nominated for four Oscars and features the catchy theme tune, “I Love to Whistle”:

A contingency venue in case of bad weather has kindly been provided by the nearby Marriott Hotel (the location of the Europa Cinema which also features in the app), in the first floor Consevatory.

The app is compatible with iOS, iPhone, iPod Touch and iPad.  We will also make a demo version available on Android phones for the launch. A limited number of handsets will be available if you don’t have a smartphone.  Select the appropriate ticket when you register.

Register for your free ticket at: http://lostcinemas.eventbrite.co.uk or email me if you require any further information.

This entry was posted in Uncategorized. Bookmark the permalink.